Competitors are divided into age groups, the participant’s belonging to the age group is determined by the year of birth.

In Sambo, it is allowed to use throws, holds and painful holds on the arms and legs. Throws can be carried out with the help of arms, legs and torso. In Sambo, points are awarded for throws and holds. A throw is a technique by which a sambo wrestler unbalances an opponent and throws him onto the mat on any part of his body or knees. If a sambo wrestler, pressing against an opponent with any part of the body, holds him in this position for 20 seconds, then such a technique is called a hold. In SAMBO there is a possibility of an early victory, for this it is necessary to throw the opponent on the back, remaining in the stance, hold a painful hold, score 8 points more than the opponent. The principle of scoring: 4 points are awarded:

1 point is awarded for throwing the opponent on the chest, shoulder, stomach or pelvis with the fall of the attacker. A painful hold is a technical action in a prone wrestling that forces the opponent to surrender. In Sambo, it is allowed to carry out levers, knots, infringement of joints and muscles on the opponent’s arms and legs. The bout time in sambo is 3-5 minutes of pure time.

At all official competitions it is allowed to use uniforms in accordance with the requirements established by these Rules and the sports Regulations of the All- Sambo Federation. Sambo equipment includes: a jacket (red or blue), boots (wrestlers), shorts and a belt. Participants are provided with a white T-shirt. Sambo jackets are made of cotton fabric. The sleeve of the jacket should reach the wrist, the width of the sleeve should provide a clearance between the arm and the fabric of at least 10 cm along its entire length. . Sambo boots of red, blue or combined (red-blue) color are made of soft leather or synthetic fabric and have a soft sole. 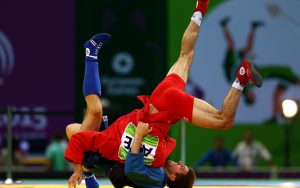 All seams of boots are hidden inside. The ankles and foot in the area of ​​the thumb joint are protected by pads covered with leather on top. Sambo shorts are made of woolen, half-woolen or synthetic jersey. From above, they should reach the line of the belt, and from below, cover the upper third of the thigh. Athletes during the fight are prohibited from carrying hard objects. Bandages and tapes can be used to avoid joint injuries. They must be closed at the top with an elastic knee pad in the color of the uniform. Refereeing The judging panel of the competition includes: chief judge, deputies of the chief judge, secretary group; mat leaders, referees, side referees.