Country of origin: Korea Also known as: Taekwondo, Taekwondo Nickname: “Way of the brush and fist” Famous fighters: Barack Obama, Steven Seagal, Jessica Alba, Willie Nelson is developing as successfully as the southern neighbor of Kim Jong-un. Originally, there were nine taekwondo kwans (schools) that were recognized by the South Korean government. Each school had its own unique style of taekwondo. In 1955, the nine kwans were merged into the one commonly studied today. In order to describe the history of this art in more detail, a separate article is needed, it is enough to say that all political events, including the notorious Korean War, strongly affected the appearance of martial arts. 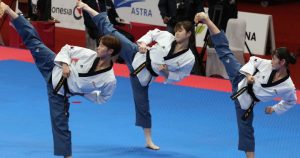 Why is taekwondo one of the best martial arts? When in films with high-intensity martial arts for one frame, a fighter kicks quickly and briskly, then most likely he uses taekwondo. Actually, powerful high kicks make taekwondo such an effective martial art. The main charm of taekwondo is not only that one good kick can put an opponent out of action, but that this martial art is extremely effective against several opponents. Unless, of course, they know taekwondo. The word “taekwondo” is made up of three words: “tae” – leg, “kwon” – fist (hand), “do” – art, the path of taekwondo, the path to improvement (the path of the arm and leg). Taekwondo is the only martial art on this list that is an Olympic sport. But Olympic restraint and fear of death did not make it less effective.

Country of Origin: Israel Also Known As: “Contact Fighting” Famous Fighters: Eyal Yanilov History of Krav Maga Krav Maga has long been recognized as one of the best self-defense martial arts in the world. This type of martial arts owes its birth to the outstanding fighter Imi Lichtenfeld. Initially, he taught his fighting system in Bratislava to help protect the Jewish community from Nazi armed groups. He created a group of trained thugs with characteristic surnames and noses, who did their best to protect the Jewish population from the growing, and at the same time very radical, manifestations of anti-Semitism. After arriving in Palestine, Lichtenfeld began teaching hand-to-hand combat in the Haganah. After the establishment of the State of Israel in 1948, he became the chief physical and hand-to-hand combat instructor at the Israel Defense Forces Combat Training School. Lichtenfeld served in the IDF until 1964, constantly developing and improving his system. After his retirement, Krav Maga was adapted by him to civilian realities. In fact, Krav Maga is his brainchild.

Why is Krav Maga one of the best martial arts? Krav Maga is designed to quickly neutralize the threat. The tricks are simple and often very dirty. However, the Jews did not have to choose. There is even a saying: “If the reception looks good and beautiful, then this is not Krav Maga.” There are three basic principles of Krav Maga: – The most important thing is to neutralize the threat. – Simultaneous defense and attack. Unlike many styles of martial arts, attacks and defenses in Krav Maga are intertwined during combat. – All blocks are built on opening the fighter the opportunity for a counterattack. All Krav Maga attacks target vulnerable areas of the human body such as the eyes, face, throat, neck, groin, and fingers. There is no place for ceremonies, philosophy and other nuances inherent in martial arts. This art was created in order to quickly and painfully eliminate an opponent. Therefore, it was adopted by the Israel Defense Forces. There is no need to bow to the military, the military needs to kill, or at least cut down. This is a deadly fighting style that recognizes no etiquette. It was born on the basis of the fighting techniques of other martial arts, in street fights with Jewish pogromists with exactly one goal – to help the Jews survive. So if you need a simple and effective way to survive in real conditions, and not a beautiful solemn martial art with your inner culture, then all attention is on Krav Maga.