Martial arts are an integral part of Chinese culture

The history of Chinese martial arts begins in the 3rd millennium BC, when Emperor Huangdi developed the theory and practice of fighting, which was called jiao-di (sov. Shuai-jiao). This martial art consisted not only in hand-to-hand combat, but also in the knowledge of the enemy’s pain points, with the aim of immobilizing or killing. This is one of the most difficult Chinese martial arts today, which requires not only physical strength, but also knowledge of medicine and philosophy.

A man practicing Tai chi in a park in Shanghai, China A young man demonstrating one of the elements of Chinese Kung Fu, China A Chinese man in traditional dress demonstrating one of the attacking postures of Chinese Kung Fu
Wushu is one of the most widespread and used types of Chinese martial arts in the world. Wu-shu literally translates as “martial art” and is divided into two main areas: “long fist” and “short blow”. The first direction includes those styles where fights are fought at arm’s length. The second direction, respectively, means combat at close range. Wushu has many directions and styles. In this type of martial art, fights can be fought both hand-to-hand and with the use of weapons. In addition, this is one of the most sought-after martial arts, which is widely used in the training of elite military special forces both in China and around the world.

Martial arts are one of the components of Chinese culture, so many philosophical treatises have been written on this topic, the most famous of which is Sun Tzu’s The Art of War. The book was written in the 6th century BC. It not only describes the strategy and politics of how to wage wars, but also develops a whole philosophy of martial arts. The treatise consists of 13 chapters. It has not lost its relevance even today, as it is considered one of the main textbooks on the strategy and history of military affairs and is studied at such well-known military academies as West Point in the USA. 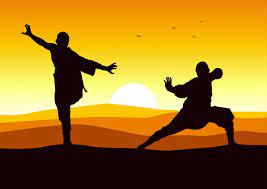 Shaolin Monastery is open to the public. Students from all over the world come here to take a few lessons from recognized masters of kung fu and qigong style (self-regulation of the body, the basis of all Chinese martial arts). Here you can learn various meditation techniques, as well as get acquainted with the history of Shaolin, which is full of secrets and mysteries. Be sure to visit the famous Lotus Temple and the cave where the monk spent 9 years meditating. A unique atmosphere reigns here, which not only brings peace, but also charges with positive energy.